We planned to get up early, but since we were awake until midnight we snoozed for an hour and only got up at 08:00. We ate the leftover pizza for breakfast while packing in the last things.

We said our goodbyes to everyone. An Italian couple and a German couple are also heading back to South Africa via Uganda and Rwanda over the next few months, so maybe we’ll meet again.

We finally hit the road at 09:00. We went on some of the back-roads that we’ve used to get to The Hub and then connected to the Southern Bypass. The highway is still brand new and was a joy to drive on. It didn’t last long enough and we soon merged onto the Mombasa-Nairobi-Kampala highway. Luckily there was a cement barrier in the middle of the road, but the almost three lane one way traffic had no lines so there were just cars, busses and trucks all over criss-crossing each other.

10km later we turned off towards Narok and was pleasantly surprised with the magnificent views over the plains. The tar had deep ruts from all the trucks, but we just stayed behind a truck and took it slow. 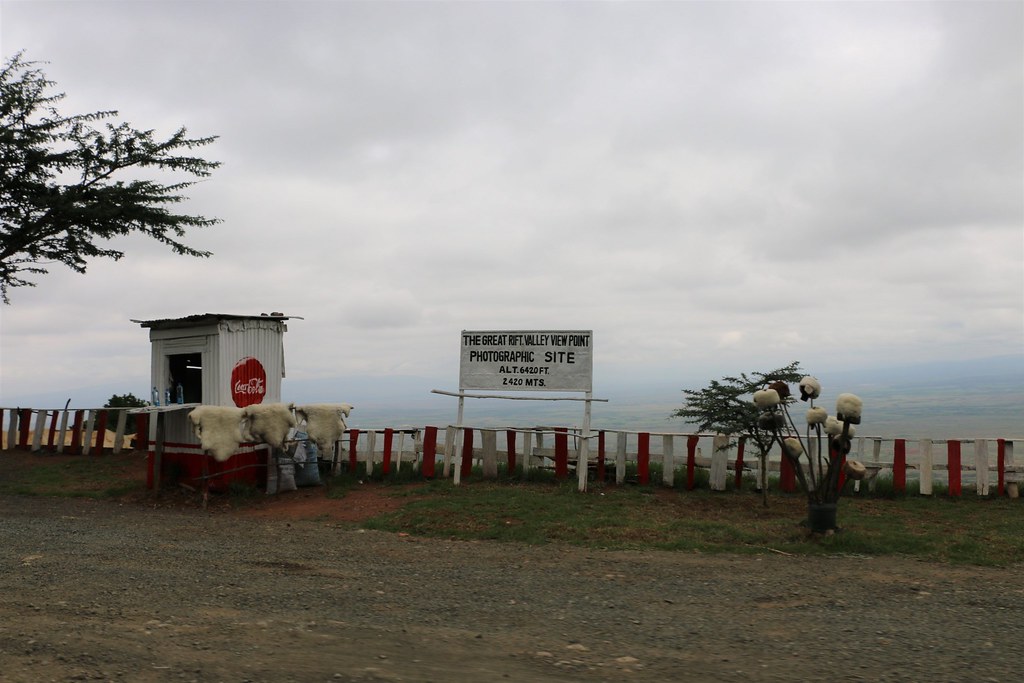 Sometime after Narok we probably didn’t hear the GPS, because when we finally saw that we had to turn left it was at a small gravel road with no sign posts. We stopped to investigate and realised that we probably missed the real turn off and now the GPS suggested this road as an alternative. We decided to just go with it and for the first time in months we went on a gravel road again (for longer than 2km). The road was quite bad and we thought it’s just because it is a small unused back road. After 13km we however got to the ‘main’ road heading to Talek. This road was however in an even worse condition. Luckily it wasn’t badly corrugated, but is was very rocky and still bumpy. At some sections the road was washed away and alternative roads have been made through the dongas.

10km before Talek we saw the sign for the Maa Trust, who we wanted to visit tomorrow, and decided to turn off and check it out. At the office we asked whether we can just camp here tonight. After what looked to us like some confusion they finally said we’re more than welcome and showed us where we can park. We designed their website (themaatrust.org) almost a year ago and contacted them to organise a visit. The CEO was back in the UK getting married, but she did inform the local staff that we’ll be coming. We have no idea what to expect tomorrow. 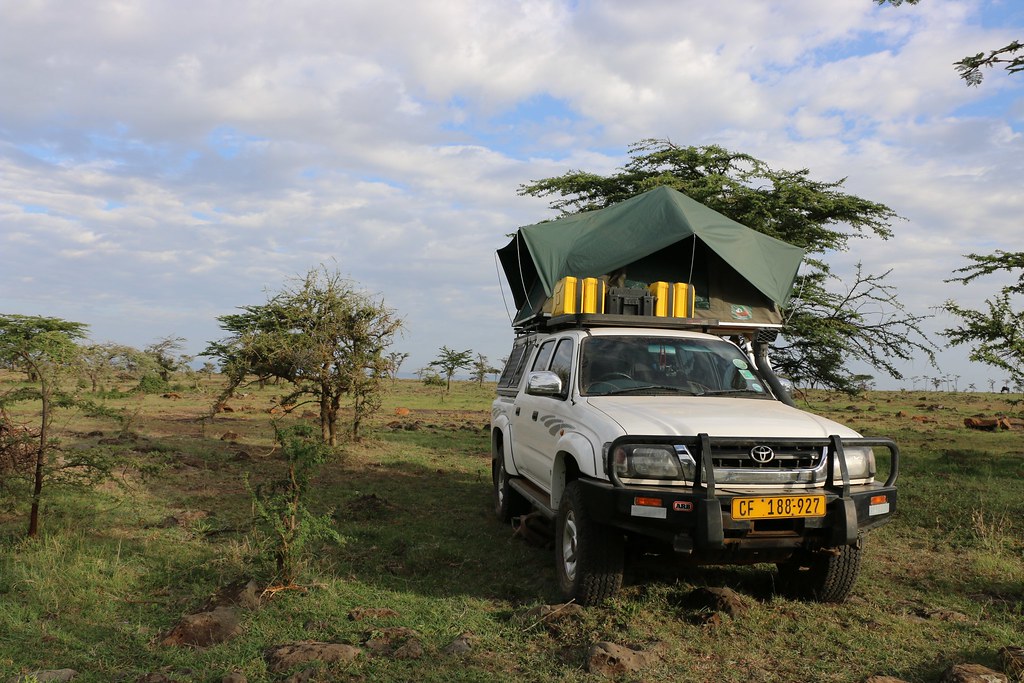 The office is in the Olare Orok Conservancy, which borders the Masai Mara without any fences. We were thus surrounded by wildlife. 100s of wildebeest were grazing and running in circles less than 100m from our tent. Gazelle, impala and giraffe were also seen grazing in front of us. The snorting of the wildebeest became almost deafening at night with the occasional laugh of hyena.

For dinner Caro made tandoori chicken with pilaf rice (with the spices we bought in Zanzibar). We went to bed early and read a while, Hugo’s Kobo finally started working again so we could read at the same time.

We didn’t get much sleep with all the noise from the wildlife, but managed to pull ourselves out of bed by 08:00. We ate the leftover chicken and rice for breakfast.

We went to the container office to try and find out what was in store for us for today. Marias who was in charge while the CEO is away, told us he’ll take us on a game drive in the afternoon and before then someone will show us the shop with leather and beadwork. The lady in charge of the shop was still packing up and taking stock so we just stood around for an hour and then she told us what every items was. Some things wasn’t actually that obvious, like the dog and cat collars that we just thought were small belts. After we showed as much interest as we possibly could and asked all the questions we could think of, she asked whether we would like to try some beadwork. We both said it would be fun… Little did Hugo know that this is the only thing we would be doing for the rest of the day. 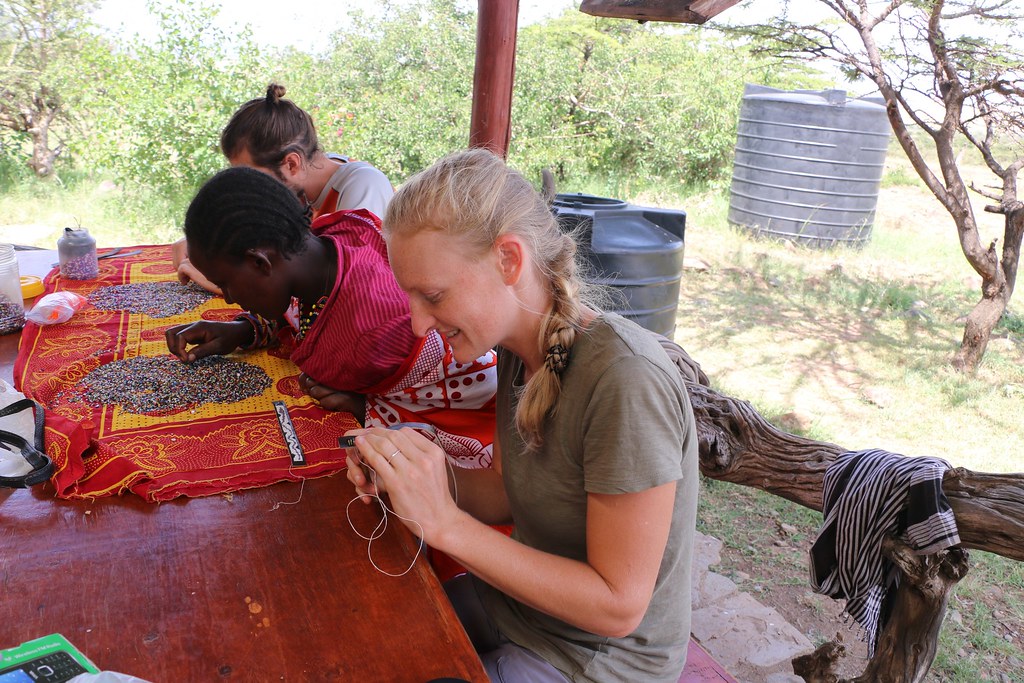 After an hour of beadwork they offered us rice and beans for lunch. We sat between the other beading ladies and made items for the shop. Hugo later gave up and went to read while Caro worked until the end and helped to pack up the shop again. When Caro asked about the game drive, Marias said we can do it tomorrow morning.

We just had bread with cheese for dinner. We went to bed again early. When nature called Hugo, he saw hundreds of eyes as close as 20m from the tent.